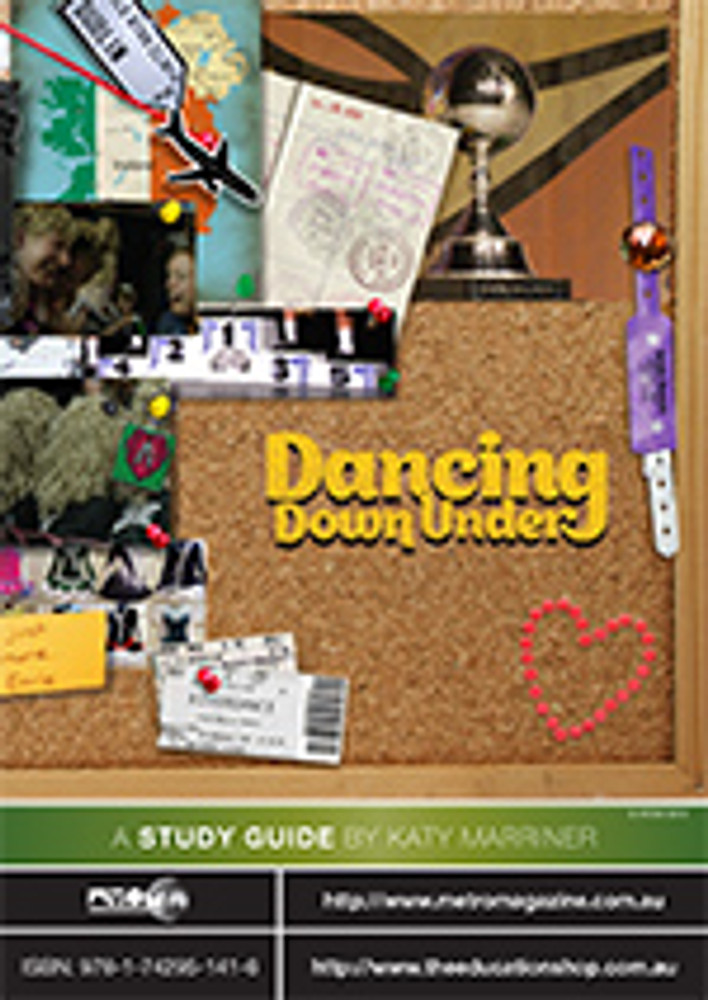 Dancing Down Under is an observational documentary series by Wild Fury about the colourful and competitive world of Irish dancing in Australia. Over ten episodes the series follows four young Australians as they compete in the 2010 Australian Irish Dancing National Championships and then the 2011 World Irish Dancing Championships in Dublin, Ireland.

Sixteen-year-old Ceili comes from a family of champions. Her mother Fiona won the World Irish Championships thirty years ago in Ceili's age group and she is keen to match her mum's success. Fourteen-year-old Thommy is keen to take to the world stage, while nineteen-year-old Brent wants a place on the podium at the World Championships. Carina, who at twenty-one years of age is coming to the end of her competitive dancing career, wants to give it her all for the last time.

The dancers spend countless hours rehearsing the dance steps and keeping fit. Their teachers, in some cases their mothers, are dedicated and disciplined, and expect the same of their students. Their parents encourage their children to dance their way to a dream come true, winning at the Australian Nationals and qualifying for the Worlds.

Competing at the Australian National Irish Dancing Championships is an exciting but nerve-wracking experience for the dancers, their parents and their dance teachers. Ceili, Brent, Thommy and Carina wait patiently and anxiously backstage before taking to the stage to compete. Their families and teachers watch from their seats. Ceili and Carina take out the trophy in their respective sections. Brent comes in second and Thommy has to settle for third place. The boys are disappointed by defeat but at least they have qualified for the World Irish Dancing Championships. Ceili's siblings, eight-year-old Danae and eleven-year-old Jonty also bring home trophies from the Nationals. Marigold Cousens, Ceili's best friend and rival, places second but decides not to go to the Worlds. Nineteen-year-old Siobhan Fitzpatrick follows suit. She is happy with placing second in her section but would rather focus on her university studies than make the trip to Dublin. Seventeen-year-old Samantha Murphy comes tenth in her section and fails to qualify.

Irish dancing has become a highly competitive international sport. Featuring extreme wigs, elaborate costumes and complex steps, the dancers try to catch the judges' eyes at any cost. As the Australian dancers pack their bags for Ireland, they know that this will be their greatest test to date.

In Dublin, the Australians must face their competition, the best Irish dancers in the world. Twelve-year-old Róisín Naughton and sixteen-year-old Shaunagh Smith are determined to do well. Fifteen-year-old Richard Murray is making a comeback. He has already won two World Championship titles and is keen to reclaim his place on the winner's podium. Like Carina, twenty-one-year-old Emma Warren thinks this may be her last time at the Worlds. The Australian contingent is bolstered by fifteen-year-old Sarah Wallace who is returning to dancing after injury and twenty-year old Colbee Mifsud, who has been training in Belfast to hopefully find the edge she needs to win at competition level.

Told from the candid perspectives of the dancers, their parents and their dance teachers, Dancing Down Under provides an insight into the dream and drama of competitive Irish dancing.<