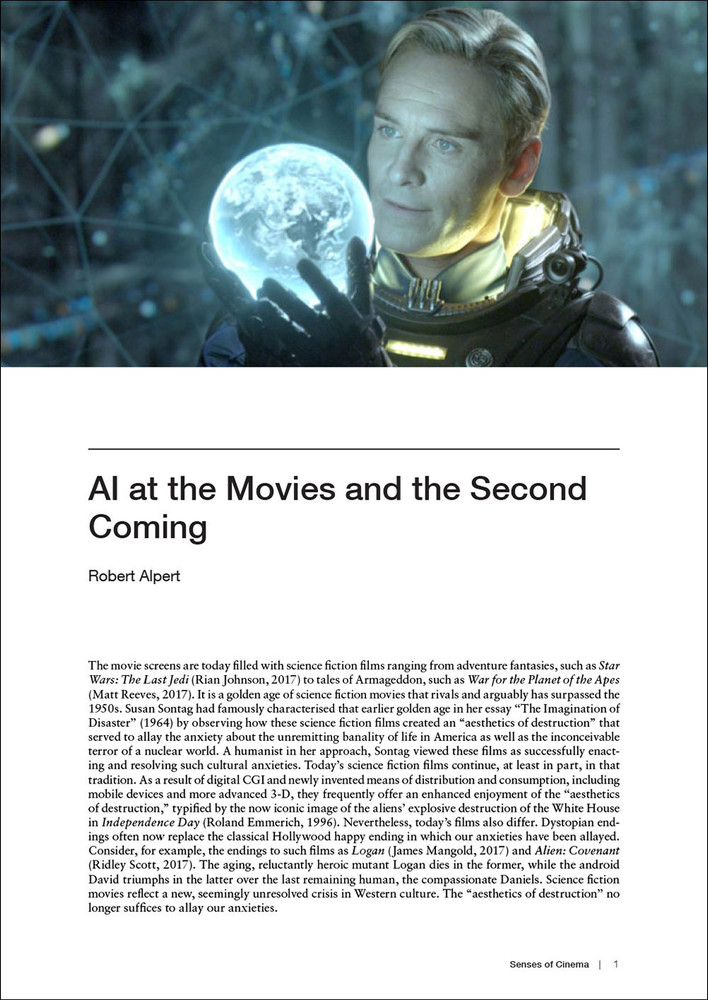 AI at the Movies and the Second Coming

The movie screens are today filled with science fiction films ranging from adventure fantasies, such as Star Wars: The Last Jedi (Rian Johnson, 2017) to tales of Armageddon, such as War for the Planet of the Apes (Matt Reeves, 2017). It is a golden age of science fiction movies that rivals and arguably has surpassed the 1950s. Susan Sontag had famously characterised that earlier golden age in her essay 'The Imagination of Disaster' (1964) by observing how these science fiction films created an 'aesthetics of destruction' that served to allay the anxiety about the unremitting banality of life in America as well as the inconceivable terror of a nuclear world. A humanist in her approach, Sontag viewed these films as successfully enacting and resolving such cultural anxieties. Today's science fiction films continue, at least in part, in that tradition. As a result of digital CGI and newly invented means of distribution and consumption, including mobile devices and more advanced 3-D, they frequently offer an enhanced enjoyment of the 'aesthetics of destruction,' typified by the now iconic image of the aliens' explosive destruction of the White House in Independence Day (Roland Emmerich, 1996). Nevertheless, today's films also differ. Dystopian endings often now replace the classical Hollywood happy ending in which our anxieties have been allayed. Consider, for example, the endings to such films as Logan (James Mangold, 2017) and Alien: Covenant (Ridley Scott, 2017). The aging, reluctantly heroic mutant Logan dies in the former, while the android David triumphs in the latter over the last remaining human, the compassionate Daniels. Science fiction movies reflect a new, seemingly unresolved crisis in Western culture. The 'aesthetics of destruction' no longer suffices to allay our anxieties.

Punk Aesthetics: The Filth and the Movies

Therapy at the Movies