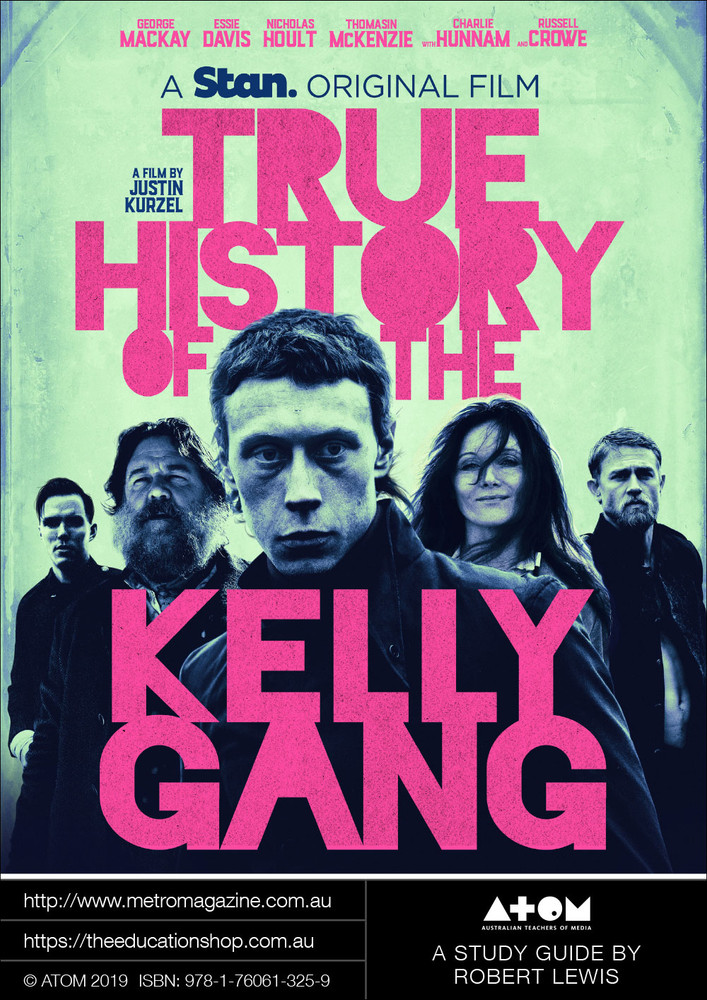 True History of the Kelly Gang (Justin Kurzel, 2019) is a 125-minute feature film adaptation of the 2000 Man Booker prize-winning novel of the same name by Peter Carey.

When Peter Carey's novel TRUE HISTORY OF THE KELLY GANG arrived in 2000 it challenged the myth behind Australia's most celebrated bushranger and forced a country to stare back into its violent past. Never has a piece of writing come closer to depicting the raw, powerful nature of Ned Kelly, and now through Justin Kurzel's visionary eye, we see a film which refuses to be familiar or sentimental, but instead throws you into the imagined world of this extraordinary outlaw – and his tragic descent into the heart of darkness.

This is a punk story for our times; a journey from the innocence of a boy wanting nothing more than to protect and provide for his family, to the iron clad terrorist who builds an army to destroy everything in front of him to free his mother. The film focuses on the tender and volatile relationship between Ned and his mother, Ellen Kelly (Essie Davis), spanning both the younger years of Ned Kelly (Orlando Schwerdt), to the time leading up to his death, played by George Mackay. Ellen is a matriarch, whose own loneliness controls the destiny of her eldest son – feeding him with love and affection when she feels him drifting away, guilt and shame when he reaches for a better life.

Haunted by the maddening decline of his tortured father Red Kelly (Ben Corbett); groomed and nurtured by the infamous bushranger Harry Power (Russell Crowe); hounded and hunted by the forces of the law like Sergeant O'Neill (Charle Hunnam), Ned Kelly is a man desperately trying to carve out his true history through the tip of a pen and the barrel of a gun. Along with Ned's brother Dan Kelly (Earl Cave) and friends, Joe Byrne (Sean Keenan) and Steve Hart (Louis Hewison), they become the Kelly Gang, driven to rage by circumstance, fuelled by youth and the blurred boundaries between the law and those classed as outlaws. Kelly's rage, but also curiosity, will be directed toward Constable Fitzpatrick (Nicholas Hoult) and the search for connection in the barren landscape, seen between Ned Kelly and Mary Hearn (Thomasin McKenzie). Ned Kelly's true motivation and truth will lie in the bond between a mother and a son and the lengths sought to reconcile it.

True History of the Kelly Gang is suitable for senior students (10-12) who fit under the MA15+ classification in: