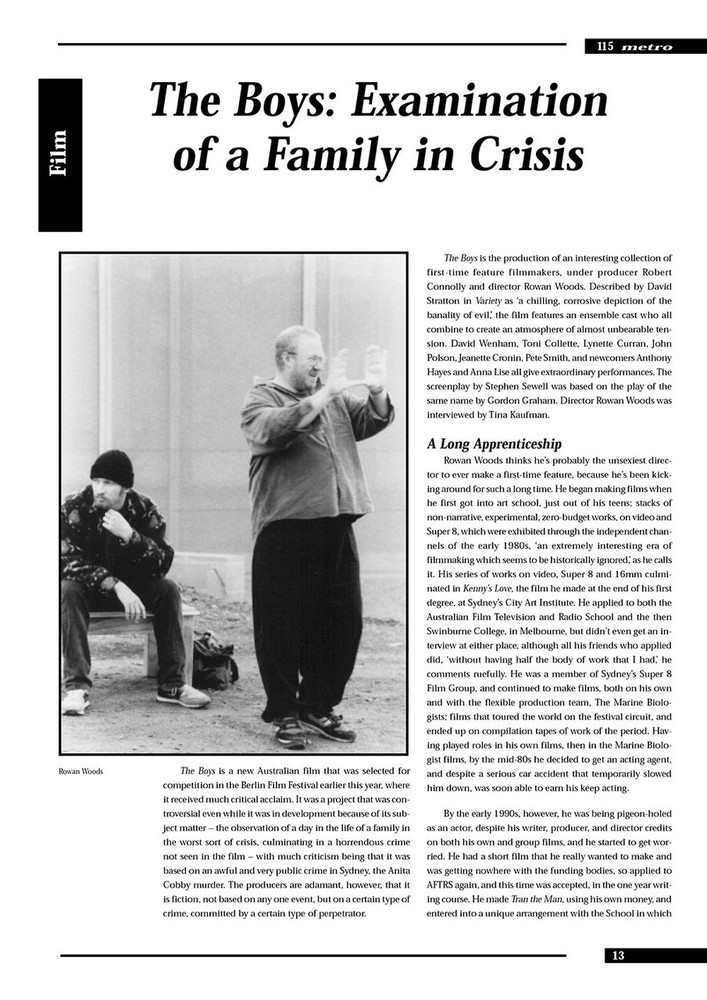 The Boys': Examination of a Family in Crisis

The Boys is a new Australian film that was selected for competition in the Berlin Film Festival earlier this year (at the time of writing in 1998), where it received much critical acclaim. It was a project that was controversial even while it was in development because of its subject matter – the observation of a day in the life of a family in the worst sort of crisis, culminating in a horrendous crime not seen in the film – with much criticism being that it was based on an awful and very public crime in Sydney, the Anita Cobby murder. The producers are adamant, however, that it is fiction, not based on any one event, but on a certain type of crime, committed by a certain type of perpetrator.

The Boys is the production of an interesting collection of first-time feature filmmakers, under producer Robert Connolly and director Rowan Woods. Described by David Stratton in Variety as 'a chilling, corrosive depiction of the banality of evil', the film features an ensemble cast who all combine to create an atmosphere of almost unbearable tension. David Wenham, Toni Collette, Lynette Curran, John Polson, Jeanette Cronin, Pete Smith, and newcomers Anthony Hayes and Anna Lise, all give extraordinary performances. The screenplay by Stephen Sewell was based on the play of the same name by Gordon Graham. Director Rowan Woods was interviewed by Tina Kaufman.

Battling Against the Odds: An Education System in Crisis

Learning to Be a Man: The Mask You Live In and the Masculinity Crisis

Lifting the Veil: On the Bride's Side and the Migrant Crisis

Our Very Own Mid-Life Crisis