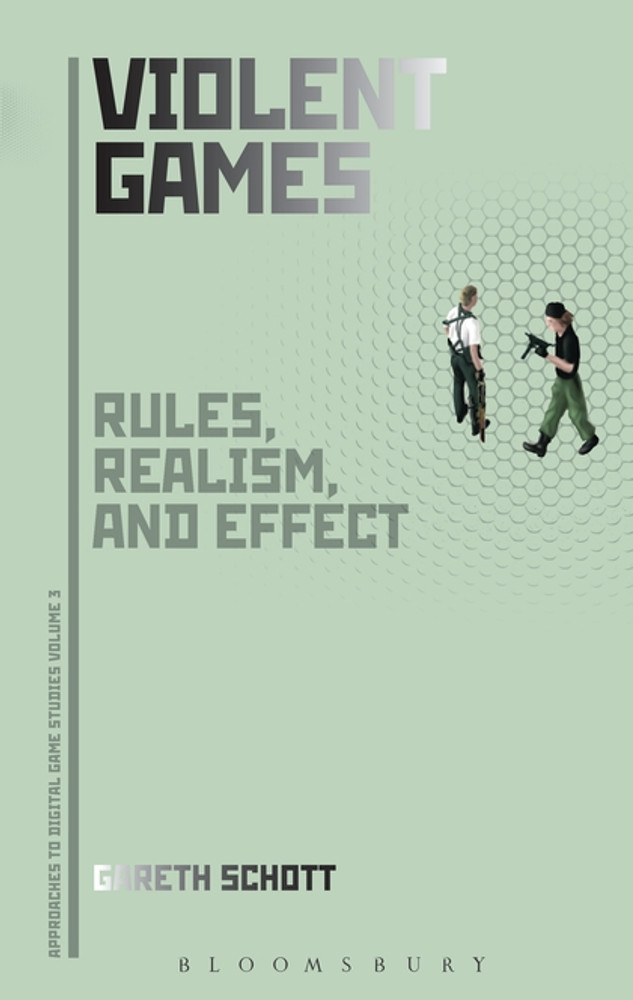 It was over a decade ago that experimental psychologists and media-effects researchers declared the debate on the effects of violent video gaming as 'essentially over', referring to the way violence in videogames increases aggressive thoughts, feelings and behaviours in players. Despite the decisive tone of this statement, neither the presence nor popularity of digital games has since diminished, with games continuing to attract new generations of players to experience its technological advancements in the narration of violence and its techniques of depiction.

Drawing on new insights achieved from research located at an intersection between humanities, social and computer sciences, Gareth Schott's book interrogates the nature and meaning of the 'violence' encountered and experienced by game players. In focusing on the various ways 'violence' is mediated by both the rule system and the semiotic layer of games, the aim is to draw out the distinctiveness of games' exploitation of violence or violent themes.

An important if not canonical text in the debates about video games and violence, Violent Games constitutes an essential book for those wishing to make sense of the experience offered by games as technological, aesthetic and communicational phenomena in the context of issues of media regulation and the classification of game content 'as' violence.

Testimonials:
'Gareth Schott's examination of the debates surrounding violent video games presents an important and fresh perspective on this contentious issue. Given the moral panic surrounding games, scholars have increasingly been calling for more sociological examinations of the phenomenology of media panics and media research itself. Schott's work represents a cogent effort in this regard that should be required reading of all students and scholars of media effects.'
– Christopher Ferguson, Associate Professor of Psychology, Stetson University, USA

'The interrelationships between video games, virtual or simulated aggression, violence and ludic fictionality are among the most complex and controversial in the fields of studies and culture of video games. Based on a thorough examination of existing game research and new evidence, Gareth Schott's book is the most comprehensive and thoughtful reflection yet written on game violence. The reader will not only learn about how violent elements become experienced in the context of video game play, but also to reappraise what we mean by 'violence', to start with. Learned and articulate, Violent Games will open new avenues for thought for both students and scholars, and also provide a solid foundation for the decision making by parents, educators and policy creators alike.'
– Frans Mäyrä, Professor of Information Studies and Interactive Media, Game Research Lab, University of Tampere, Finland

'Wonderful read. Schott takes a thoughtful and balanced approach at explaining the complexity around media effects broadly and video game violence specifically, and does a superb job of weaving together scholarship from a variety of expected (communication, game studies/theory, media psychology, rhetoric) and unexpected (criminology, dramaturgy, film studies and sociology, just to name a few) areas. The result is a volume easily accessible to a variety of different audiences – a touchstone for designers and scholars, a comprehensive reader for a graduate-level seminar on video games, and chapters of the book would be accessible to younger audiences, such as undergraduates. The book blends familiar and unfamiliar scholarship to help better address the 'real issues' around the video game violence debate, as the volume puts those issues into focus. The result is a book that marks the past and present of game studies, and offers myriad suggestions for the future of the same.'
– Nicholas Bowman, Associate Professor and Research Associate, Media and Interaction Lab, West Virginia University, USA

Psychoanalytic Film Theory and The Rules of the Game

Playing by Their Own Rules: ACMI's Game Masters

PNG: The Rules of the Game (ATOM Study Guide)